If you follow me on Facebook or Instagram, then you probably already know that last Friday marked the 20th anniversary of my first day working in Hollywood (technically Santa Monica, but you get the point). When people tell you “it goes by fast” you have no idea how fast until you’ve been here for twenty years and you wake up with a house, a wife, two kids, and a puppy by your side as you write. 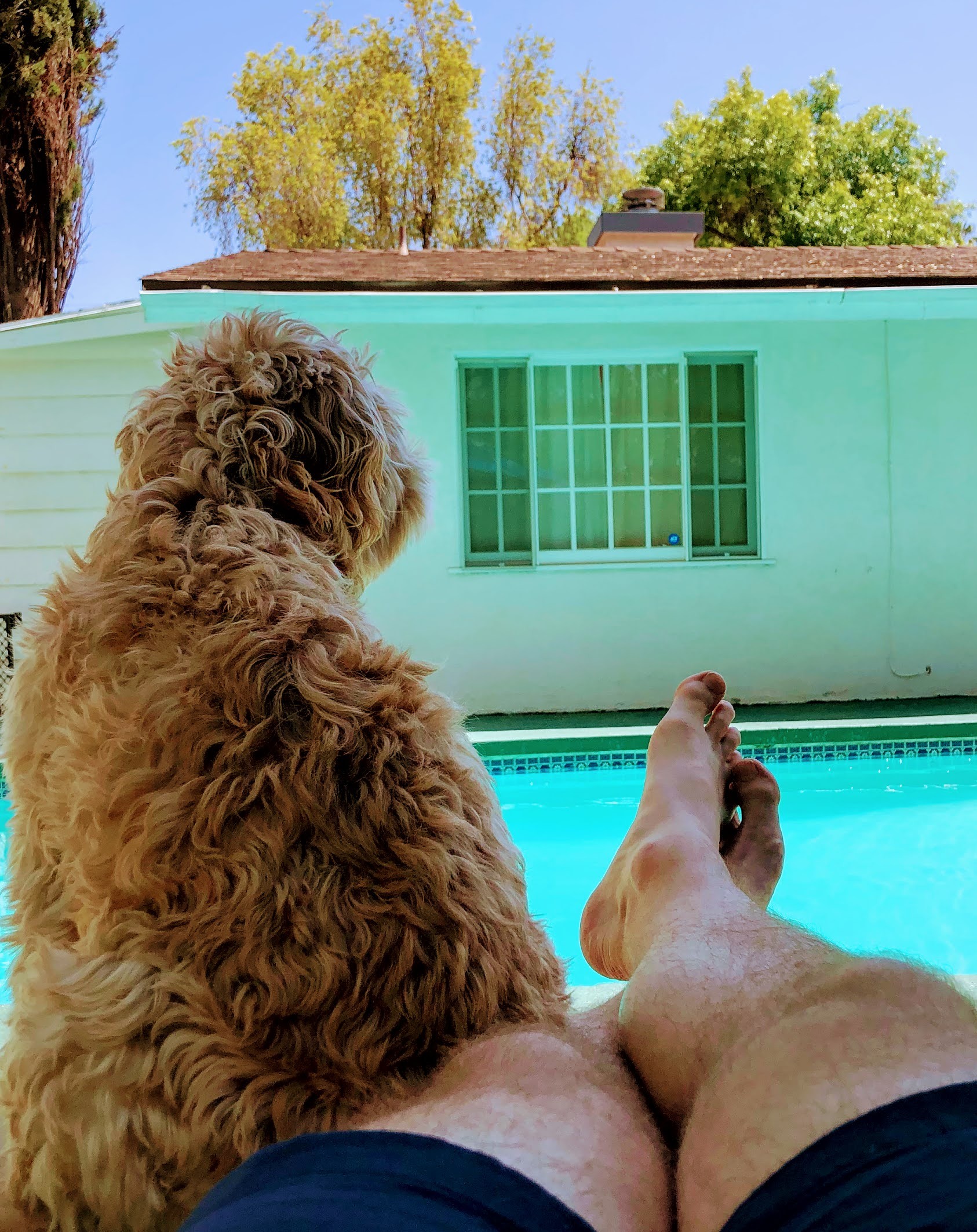 Had you told me twenty years ago where I’d be today, I would’ve called you a liar.

It’s not that I didn’t believe I could succeed (even as a rookie I always believed I would “make it”), but I ended up walking a completely different path than I would’ve imagined and ended up in a totally different (and better) place.

But ultimately success came with quite a few hard lessons learned along the way, ten of which I’d like to share with you now. Whether you too are brand new to the industry – or even if you’re a seasoned vet – I hope these lessons inspire you to continue pursuing goals that mean something to you and leave a positive impact on the world.

10 Lessons Learned From 20 Years In Hollywood

1. However Long You Think Something Will Take – Double It

As a creative professional, whether it’s little things like cutting a scene (or writing a newsletter like this one), or big things like winning an Oscar or landing your dream gig, EVERYTHING will take longer than you think. Just because you’ve set an arbitrary deadline to achieve a specific goal doesn’t mean you’ve failed if you haven’t achieved it by a specific time or age, it just means you haven’t achieved your goal YET.

We are not doctors or lawyers who all walk the same path to the same destination. You could potentially reach your goals via a 1000 different and unique paths, and each one is going to take a different amount of time. Remind yourself that you are playing a game of chess, not a game of checkers. To quote Bill Gates (and what has come to be known as Gates’ Law):

2. Planning Anything Beyond 3 Years is Wasted Effort

To go beyond the quote above, I’m not saying you shouldn’t think big (in fact you should think HUGE!), but having a detailed & specific plan anywhere beyond 3 years is wasted time & effort. The world changes and evolves so rapidly today that having a detailed 5, 10, or even a 15 Year Plan is simply setting yourself up for failure. (Don’t believe me? Ask anyone who created a 5 year plan in 2020 how that’s working out for them.)

Instead of thinking that in 10 years you will have a specific job, income, or house in a specific neighborhood, instead focus on the kind of person you want to be a decade from now.

Ten years from now I know that I want to be financially independent, in the best health I’ve been in my entire life (and I’ll be 52 by then), in a happy marriage, and have a great relationship with my kids. But I’m not shooting for a specific goal, income, city or state to live in, or other.

Working towards a specific identity rather than long-term goals give you more freedom to pursue interesting and new ideas without feeling like you’re losing yourself in the process.

3. Nobody Will Prioritize Your Well-Being Except You

Nobody you work with (except a very select few) cares if you’re tired, if your work is unfulfilling, or if you’re burned out. Nobody cares if you have a long commute, a kid with difficulty reading, or you struggle with mental health issues. All people care about is if you can get the job done right and on time (and preferably under budget with free weekends thrown in…after all, you can put it on your reel!).

If you don’t learn to set healthy boundaries for yourself, you won’t have any boundaries at all. And your time & expertise will be taken advantage of until you reach your limit. Then you will be replaced and the cycle will repeat. (Ask me how I know this)

One more time for those of you in the cheap seats:
If you don’t set healthy boundaries for yourself, you won’t have any boundaries at all.

4. You Are Not Your Job (or Your Credits on IMDb)

It’s so easy to get sucked into the Hollywood dream, the glitz and glamour of working in entertainment, and that warm feeling you get when someone actually recognizes (or even watches) something you’ve worked on. But it’s a slippery slope to tie your identity to your work. Because as soon as you’re between jobs, or if you’re working on a project that doesn’t fulfill you, who are you?

Nothing causes an identity crisis quicker than a hiatus, which is why the pandemic has been such a huge wake-up call for millions of people around the world.

No matter how much you love your job (or are obsessed with it), it’s absolutely vital that you find hobbies & interests (or obsessions, in my case) outside your job. These interests will improve your well-being, make you more creative, inspire outside-the-box ideas, and expand your network in ways you never would’ve dreamed possible.

I don’t care if you’re the best on the planet at your specific craft – if nobody knows, and more specifically if the RIGHT people don’t know – you are wasting your talent and potential. I wasted years in Hollywood focusing solely on my craft only to realize I had no friends outside my job and a network so limited that the only way I could keep working was doing more of the same work for the same people. That’s all well and good until you want to do something else.

If you prioritizing networking no different than exercise, diet, or even breathing, your career will completely change over time. But as I said above, you have to be patient while you play chess. Checkers will get you the next gig and can help you pay the bills, but it won’t lead you to the promised land.

6. If You Want to Succeed, You Must Be Willing to Fail

Failure is not a path to success, failure is the path to success. If you are willing to embrace the pain, embarrassment, and discomfort that comes with regular & repeated failure, you will become a huge success. It’s not magic, it’s just math. The more attempts at anything, the better you will get, and the higher your likelihood of success. And as you begin to reframe failure as feedback, it actually becomes fun! Ultimately the only way you truly fail is by giving up, or even worse…never trying at all.

7. Being Efficient Isn’t Nearly As Important As Being
Effective

In our 21st century 24/7 work-till-you-die-drop culture, we define ourselves by not only our jobs but also by our levels of productivity. The less we accomplish, the less valuable we are to society. For years I believed the most important character trait to possess was my ability to work hard…until it nearly killed me numerous times. The older I’ve become, the more I’ve learned the value of working smart.

Efficiency is great, but it’s only a meaningful use of your time if you’re doing the right things that move your life forwards. Only then are your actions effective.

It’s a very common myth that only the assholes in Hollywood climb to the top, because the only way to the top of the mountain is stepping over others along the way. But I believe the complete and total opposite. By and large I truly believe from the bottom of my heart that most people want to help you succeed…they just don’t know how to help you. And it’s your job (see the importance of networking above) that the right people not only know you exist but understand how to help you. And yes, I understand that being vulnerable is scary. But just like you, everyone is trying to figure it out.

Hollywood doesn’t have to be a zero sum game whereby we all live with a scarcity mentality and we compete for a limited amount of opportunities. A rising tide lifts all boats.

9. It Is Possible to Have It All…Just Not All At Once

I’ve talked to hundreds of people around the world who are terrified of pursuing their dreams because they don’t want to sacrifice their health, relationships, or sanity in the pursuit of their goals. I can tell you from both personal experience, years of research, and interviewing hundreds of top performers that it is absolutely possible to have it all…but you can’t have it all at once.

If you set a clear intention for what you want your life to become, you can balance having a successful career while also being present for your family (and still having time & energy left over for your own interests…see hobbies above). But there are going to be periods where you can’t have it all at once. There might be months-on-end where you are working a ‘career job’ to earn that life-changing credit, while there will be other times where you get to spend plenty of time with your family but work is thin. And there will be rare occasions where you even land a dream job working with people who value & respect you while still having time for your family. Cherish those times, and have a plan in place to weather the rest of the challenges along the way.

10. You Can’t Wait For Permission to Become Who You Want to Be

Countless times I have worked with people who want to either make a major career transition, get a promotion, or even branch out on their own and become an entrepreneur. But they languish in career purgatory because they are waiting for permission from others to become who they want to become.

Stop waiting for permission from others to make your life happen.

What Advice Would You Give Yourself?

Whether you’ve worked in the entertainment industry for 20 days, 20 months, or 20 years, if you could travel back in time to your first week in the business, what advice would you give to yourself based on everything you’ve learned along your journey so far?

→ Let me know in the comments here